Download Now AVAILABLE ON IOS AND ANDROID IN ENGLISH AND CHINESE 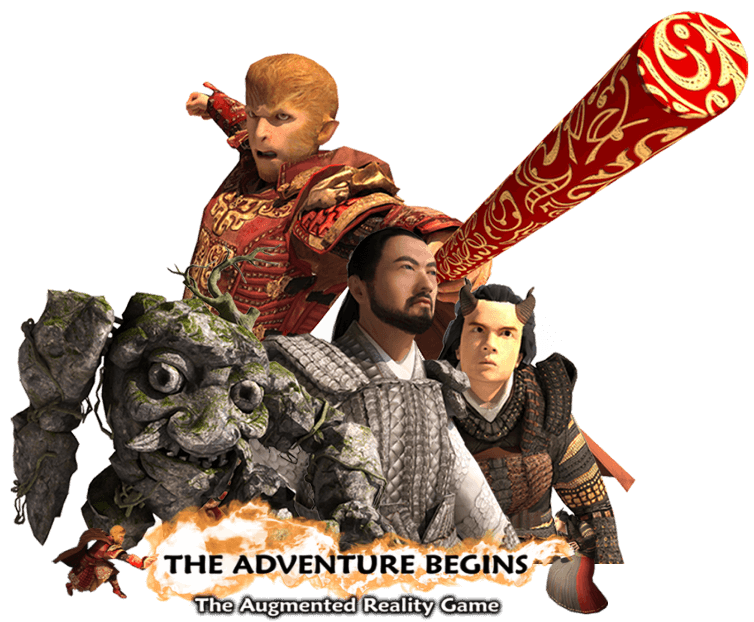 Inspired by the ancient tale “Journey to The West” which launched the legendary beloved Sun Wukong – The Monkey King –into Chinese literature, movies, TV and video games, this first of its kind mobile game app takes the classic tale to a whole new level.

AR players bring to life 3-D characters and pit them against each other on any flat surface in a their “real-world” environment. These bloodless battles can be controlled from any angle or point of view.

In either mode, using each character’s special skills, players seek to defeat their opponent and move to higher levels. After the first four levels are conquered, in-app purchases are available to enhance both performance and experience on the way to Wukong’s ultimate goal – Five Finger Mountain.

To enhance play even more, the App automatically switches from English to Mandarin by detecting the native language on your device.

Game updates and new purchases will be available and posted monthly.

The game upon download comes with four environments and four characters to choose from.

The Monkey King (Sun Wukong) is a Monkey Spirit born from a crystal that fell from Heaven. Therefore he is pre-destined to become Deity. Wukong possesses great powers that he employs to protect and provide for his monkey tribe.
Though good-hearted and well meaning, his mischievous nature often leads to more trouble than good.

Among the Special Moves and weapons
he uses to prevail against his adversaries
on his journey to Heaven
and Immortality are:
– Monkey Smash
– Transforms into Giant Ape

The Buffalo King is the most powerful ruler of all Demons and enemy of all Deities. His failed attempt to overthrow
the Jade Emperor and make his tribe the supreme rulers over all of Heaven led to his banishment to Flaming Mountain where he plots to strike again.

In his ongoing battles with
The Monkey King he uses these
Special Moves and weapons:
– Buffalo Strike
Coming Soon:
– Haunted Battle Axe
– Cloak of Black Smoke
– Transforms into Giant Bull

The Rock Monster is a creature made of rocks that terrorizes the inhabitants of Wukong’s homeland, Mountain of Fruits
and Flowers. Bringing fear and destruction to his adversaries
on the Island, he symbolizes the power of Nature to fight for its own survival against disrespectful intruders.

The Jade Emperor is a very wise and compassionate immortal ruler of Heaven, Earth, and Hell who resides in the Heavenly Palace. His reign is constantly challenged by The Buffalo King,
his demon brother-in-law.

He uses a variety of weapons
and powers to protect Heaven,
including:
– Dragon Wave
Coming Soon:
– Heavenly Sword
– Transforms into Dragon