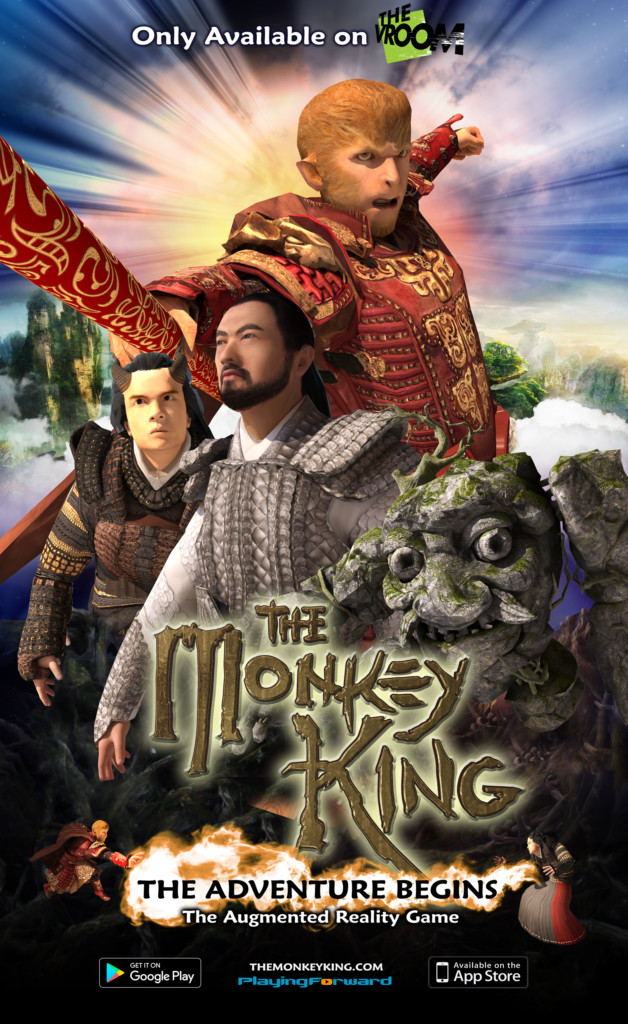 Visitors to Stan Lee’s booth at the Convention Center will get a sneak preview of the game play in which players can bring to life 3-Dimensional characters and pit them against each other on any flat service. Using each character’s special skills players seek to defeat their opponent and move to higher levels. The bloodless battles can be controlled and viewed from any angle or point of view.

At its formal launch in November, The Monkey King: The Adventure Begins will reside on The VRoom, a multi-channel digital network with each channel dedicated to multiple interactions with individual characters, stories and games. The first three channels will feature The Monkey King, Stan Lee’s Kids Universe (Dex T-Rex) and Maxi-The Taxi Dog (with more channels on the way).

Upon its formal launch the game app will feature Sun Wukong and three other characters inspired by the classic Chinese tale – The Buffalo King, The Jade Emperor and the Rock Monster. Other characters will be added as the app is updated.

The game is free to play, works with most mobile smart screen devices and will be available on The PF VRoom downloadable app through the Apple Store (iOS), Google Play (Android), Amazon (Kindle) or at TheMonkeyKing.com

Michael Wehrhahn, producer of the upcoming English language version of The Monkey King: The Legend Begins motion picture, also co- produced the app and is supervising the development of additional content for The VRoom’s Monkey King Channel.

“We are excited about launching the first AR game app featuring Sun Wukong, the beloved Monkey King, on Playing Forward’s incredible on-line network,” said Wehrhahn, “There’s never been a single site featuring these kind of innovative experiences for young audiences, so for us it’s the ideal place from which to introduce our characters to a new audience”

Along with the Monkey King app, MK Games is launching an on-line social network web site bringing together a global community who are fans of all things “Monkey King,” The site connects to numerous social networks as well as The VRoom.