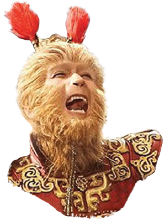 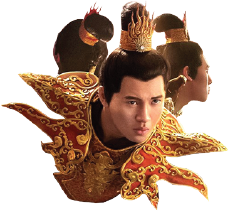 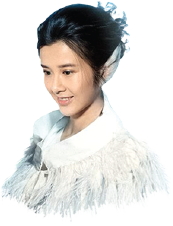 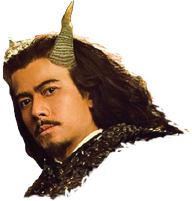 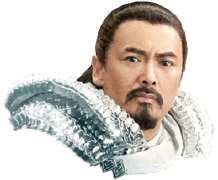 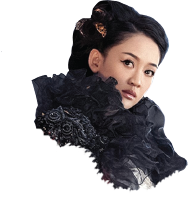 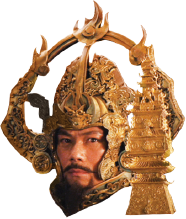 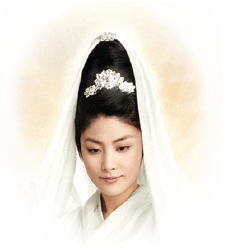 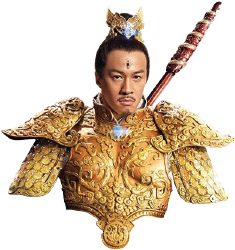 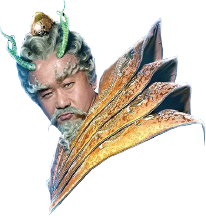 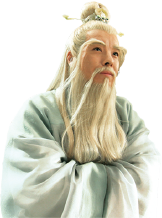 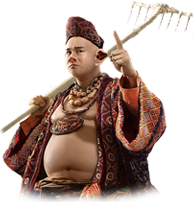 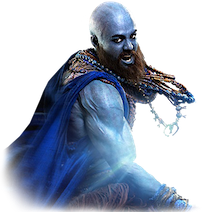 Sun Wukong is a Monkey Spirit born from a crystal that fell from Heaven to The Mountain of Flowers and Fruit (Mount Huaguo) in the Eastern Sea. The crystal came from the body of Princess Nuwa – pre-determining him to become a Heavenly Deity.

Wukong possesses great powers that he employed to protect and provide for his monkey tribe, thus being crowned “The Handsome Monkey King.” He is also known as “The Great Sage Equal of Heaven”.

The name Sun Wukong, given to him by his teacher and spiritual guide Master Subhuti, means “monkey awakened to emptiness.”

Though good-hearted and well meaning, The Monkey King’s naiveté and rambunctiousness often lead to more trouble than good.

The Monkey King’s Weapons and Armor:

Nezha is a warrior deity, who became a student and an immortal. He was commanded by Erlangshen and The Jade Emperor.

Silver Fox/Ruxue is a spirit who can transform from a white fox to a beautiful woman. As a young kit she found The Monkey King in the fallen crystal and asked Buffalo Demon King to free him. In return, the demon asks that she fulfill a favor for him at a later date. She is thus drawn unwittingly into his sinister plot to trick Sun Wukong into joining forces with the demon attack on Heaven.

As a minor spirit, she has a finite lifespan of about 200 years which propels Wukong’s quest to acquire The Breath of Life.

The Buffalo Demon King is the most powerful demon and ruler of all demons. He seeks to overthrow the Jade Emperor and make demons the supreme beings over deities. His wife, Princess Iron Fan, is the sister of the Jade Emperor, making his sworn enemy his brother in law. After an unsuccessful attempt to attack Heaven, The Jade Emperor banished all demons to the Flaming Mountain on Earth, where Buffalo Demon King bides until he can strike again. He is very charismatic and can win over creatures not allied with Heaven.

This King of The Demons is a transformed white water buffalo who in the novel Journey to The West is called The Bull Demon King.

The Jade Emperor is the son of the Creator and his successor as the immortal ruler of Heaven, Earth, and Hell. It took millions of years for him to achieve Golden Immortality and another 100-million years to succeed his father on the throne. Thus he is very wise and compassionate and has obtained immense magic power. According to legend he created the stars of the Zodiac.

However, in Havoc In Heaven’s Palace he is not all powerful or all-knowing, and his reign is constantly challenged by Buffalo Demon King, his demon brother-in-law.

After repelling another attack led by Buffalo Demon King, he banished all demons to the Flaming Mountain, and warned them never to return to Heaven under penalty of complete extermination.

His birthday is a major festival in China and Taiwan.

As the beautiful wife of Buffalo Demon King and sister of The Jade Emperor, Princess Iron Fan is caught up in the eternal struggle between gods and demons. She hopes that her unborn half-deity half-demon child, Red Boy, will bring peace to the world.

She is banished from Heaven by The Jade Emperor along with her husband after Buffalo Demon King’s attack on the Heavenly Palace.

Li Jing, The Pagoda Bearer, is a Heavenly King and a former high-ranking military commander.

Li’s youngest son is the once rebellious Prince Nezha who he eventually controlled by trapping in a Golden Pagoda given to him by the magical Randeng Daoren (Burning Lamp Taoist) who lived on Mount Condor.

Princess Nuwa is a goddess in ancient Chinese mythology best known for creating mankind and repairing the pillars of heaven.

In The Monkey King, Princess Nuwa is the daughter of the Jade Emperor and takes the form of a half-crystal, half-human figure.

After the failed demon attack on Heaven, she disintegrated herself into thousands of crystals, restoring Heaven and forming the Southern Heavenly Gate. Now, any demon would burn to ash upon touching one of the crystals.

As Nuwa completed her work, a crystal fell from Heaven and landing on Mount Huaguo on an island in the East Sea. Inside was the embryo of a magical monkey who one day will become The Monkey King.

Guanyin, the immortal Goddess of Mercy exists as a higher god than the other deities, appearing to select characters during the story.

She appears to Master Subhuti and later to The Monkey King at critical moments in Havoc in Heaven’s Palace, serving as Guardian Angel to Wukong providing him with guidance and compassion.

Guanyin appears as a tall beautiful woman in flowing white robes with the children Longnu and Shancai at her sides. Longnu holds the Pearl of Light, given to Guanyin by the Dragon King. Guanyin is revered in China as the Goddess of Mercy and Compassion, protector of women, children and the unfortunate.

Endowed with the truth-seeking third eye, Erlang-Shen is known as the greatest warrior god of Heaven. His name means “Second Son God”
A nephew of The Jade Emperor, Erlang-Shen, also known as Erlang, is a most powerful figure who has been placed in charge of Heaven’s security.
Though respected for his magic and combat skills, he is unsatisfied with the role his uncle has given him and is determined to replace him on the Throne of Heaven.

In Havoc In Heaven’s Palace, Erlang conspires with The Buffalo Demon King to trick The Monkey King into unwittingly help them overthrow the Jade Emperor.

This leads to a long running duel in which Sun Wukong and Erlang employ numerous transformations. While Erlang is the stronger adversary, Wukong always manages to stay ahead and at times get the better of him thanks to his quick wits.

The Dragon King rules over the East Sea from his underwater Dragon Palace. He has three brother Dragon Kings who rule the North, West, and South seas. His treasures include many ancient weapons including the Ruyi Cudgel, which controlled the sea until The Monkey King lifted it out of the ocean floor causing a huge tidal wave.

Humans worship and give gifts to the Dragon Kings to spare them from floods and droughts. As a result their palaces are filled with treasures.

When The Monkey King invaded the Under Sea Palace looking for weapons the Dragon King ordered him killed.

The clever Monkey King foiled the plot and not only made off with the Ruyi Cudgel, but also the gold-chain armor, cloud-walking boots and the phoenix feather cap.

In the Chinese legend Master Subhuti is a wise master who teaches his students magical powers including the 72 transformations. He also instills them with good character and spiritual refinement.

Sent by Guanyin to teach The Monkey King and help him fulfill his divine destiny, he takes him from his monkey tribe on Mount Huaguo to study at Tri-Star Cave. Subhuti names monkey “Sun Wukong” which means, “awareness of nothing.”

Subhuti is also a confidant of the Jade Emperor and travels to and from Heaven on a pet crane.

In India, Subhuti is revered as one of the ten great disciples of Gautama Buddha, upon whose teachings Buddhism was founded.

Chang’e is the Goddess of the Moon. a deity who in Havoc in Heavens Palace story lives in Heaven where she collects divine energy for the elixir furnaces in which the elixir pill is forged. The elixir pill will multiply its user’s magical power and grant them eternal youth and the ability to resurrect the dead.

The Rock Monster, known in the original novel Journey to The West as The Demon King of Confusion, is a monster creature who tries to seize control of the Water Curtain Cave while Sun Wukong is away at Tri Star Cave studying with Master Subhuti

In Havoc in Heaven’s Palace he is a beast made of rocks that terrorizes the inhabitants of The Monkey King’s homeland (Mountain of Fruits and Flowers), bringing fear and destruction wherever he goes.

Pigsy (Zhu Bajie) appears as a disciple of the monk TRIPITAKA in Journey To The West.

He was originally a heavenly marshal, commander-in-chief of 80,000 Heavenly Navy Soldiers. Unfortunately he was a glutton and a womanizer. Following a drunken attempt to make romantic advances that offended the Goddess of the Moon, he was banished from Heaven by the Jade Emperor.

On Earth, he accidently fell into a pig well and was reborn as a man-eating pig-monster known as Zhu Ganglie (“strong-maned pig”).

Looking for help for TRIPITAKA, GUAN-YIN converted him to Buddhism and he was tamed by SUN WUKONG.

PIGSY symbolizes the “instinctive center”, constantly looking out for himself. He is basically interested in food, sleep and women. He is in constant conflict with SUN WUKONG and tries to make him look bad in the eyes of TRIPITAKA.

Sandy (Shā Wùjìng) is one of the three disciples of the Buddhist pilgrim Tripitaka (Xuanzang). He appears as a character in Wu Cheng’en’s Ming Dynasty novel Journey to the West, although versions of his character predate the novel.

In the novel, his background is the least developed of the pilgrims and he contributes the least to their efforts. He is called Sandy (or Sand) and is known as a “water buffalo” due to his seemingly less developed intelligence.

He was originally a general in Heaven, but was banished by the Jade Emperor when he accidently destroyed a valuable vase. The Emperor had him struck 800 times with a rod and exiled to earth, where he was reincarnated as a terrible man-eating sand demon, attacked daily by flying swords sent from heaven. As a result, he had to live in the river to avoid the punishment.

Wujing’s appearance was rather grisly; he had a red beard and his head was partially bald; a necklace consisting of skulls hung around his neck.

Guan-yin recruited him as a bodyguard for Tripitaka in exchange for some relief from his suffering. In light of his good heart she gave him his Buddhist name which means “sand aware of purity”